A responsibility to
our environment 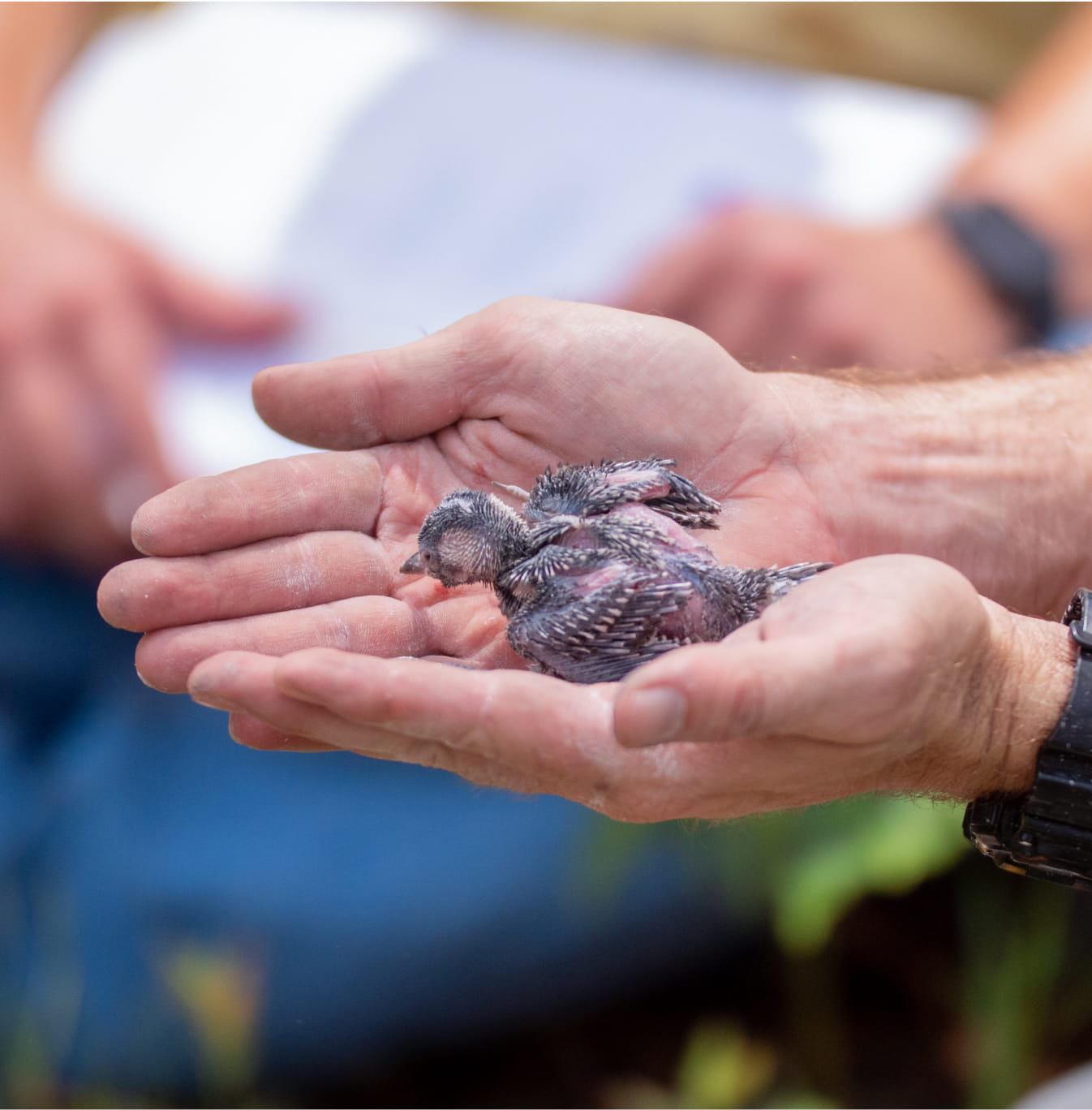 Alabama is one of the most ecologically diverse places in the nation. Alabama Power strives to protect those resources – in the field, in communities, in the way we serve our customers and in our compliance.

Every day, our biologists and environmental scientists work to protect wildlife and collect crucial data that contributes to scientific knowledge of Alabama’s natural heritage. All while our employees provide leadership in their communities by serving nonprofits focused on conservation.

As one of the largest managers of land and water resources in the state, Alabama Power aims to strengthen wildlife habitats and protect river ecosystems. We partner with federal, state and local organizations on stewardship and conservation efforts through research and education initiatives. These efforts are visible throughout this report.

We know that sharing our passion for the environment through education is a way to sustain these efforts for the future, so we have invested in programs that support the next generation of conservationists.

Five Star and Urban Waters Restoration is a public-private partnership that provides grants and technical support for community-based education and outreach projects in coastal and wetland areas. Since 2006, more than 100 acres of wetlands and 6,000 feet of protective vegetative buffers have been restored along Alabama waterways.

We’re committed to protecting and maintaining invaluable natural resources, because today’s stewardship efforts are an investment in sustaining our common future. 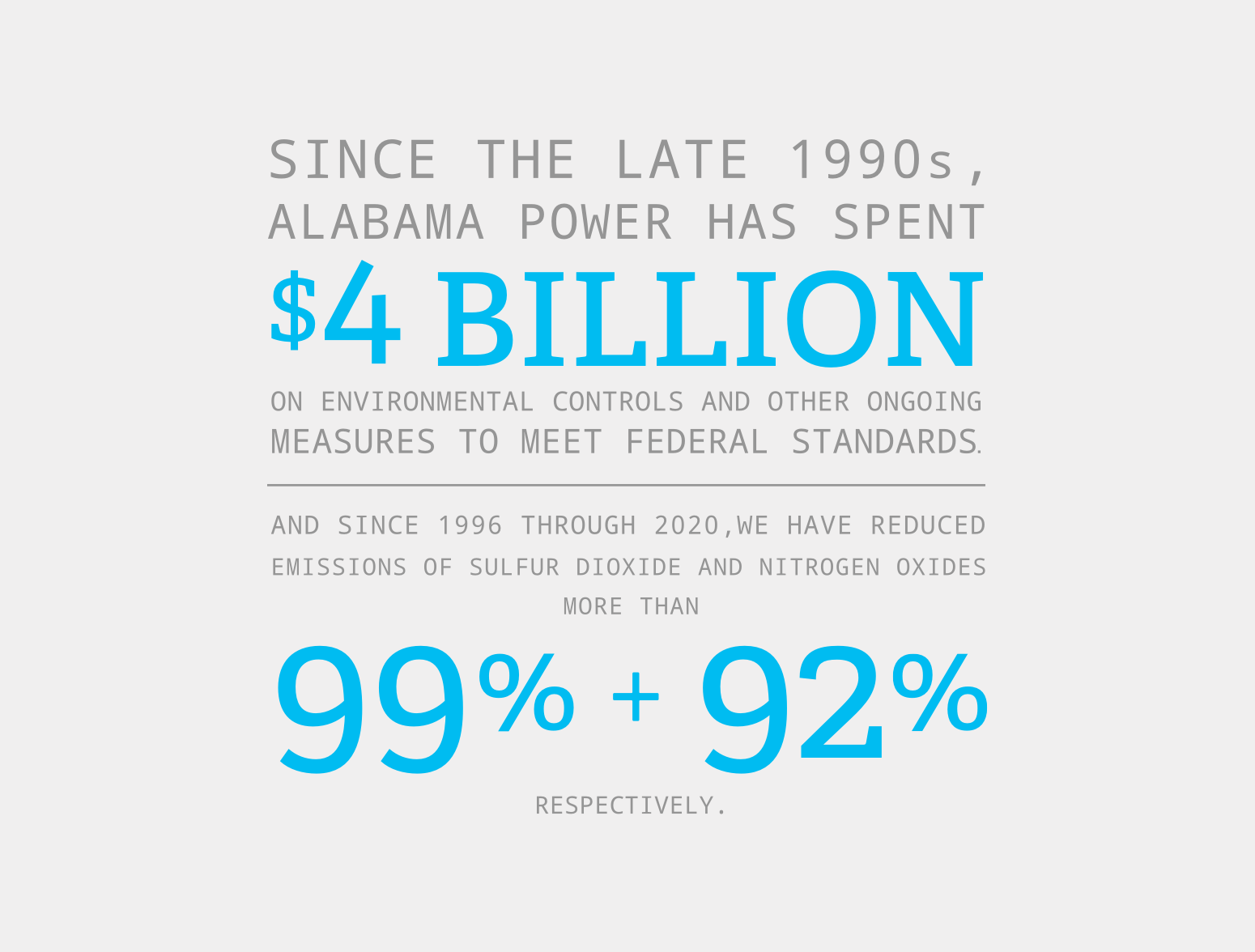 We have continually invested in diverse generation assets and new technologies to support sustainable energy generation. Since the late 1990s, Alabama Power has spent $4 billion on environmental controls and other ongoing measures to meet federal standards. And through 2020, we also have reduced emissions of sulfur dioxide and nitrogen oxides by more than 99% and 92% respectively. To realize such a positive impact, we continued our efforts to meet and exceed federal standards to protect human health and the environment through new emission control technologies.

No other organization in the state of Alabama manages more water than Alabama Power. With 11 company-owned lakes and 14 hydroelectric plants that produce emission-free electricity, we devote a great deal of effort toward improving those resources for future generations. Our reservoirs span 157,000 acres of land and 4,000 miles of shoreline, and provide clean drinking water and 65 recreation sites, as well as vibrant habitats for fish and wildlife. 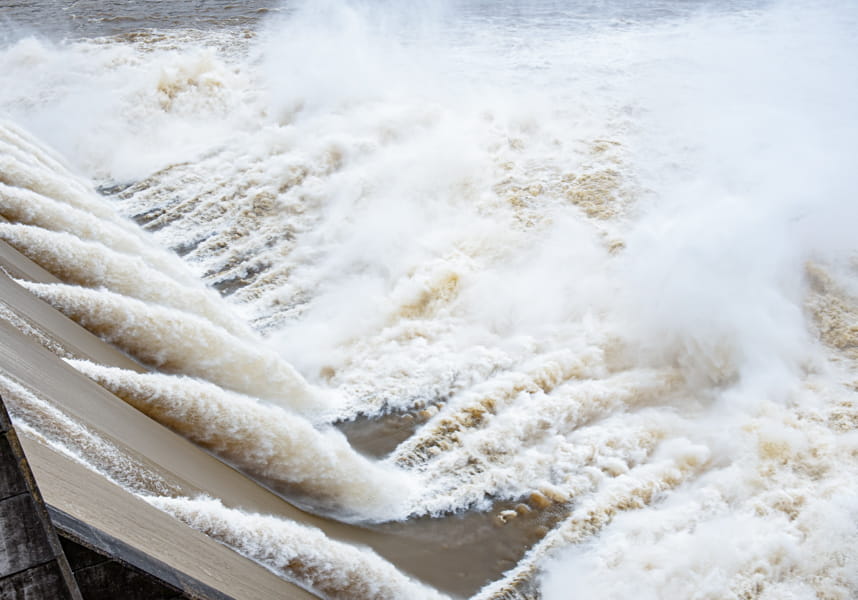 Our hydroelectric plants produce emission-free, lower-cost electricity – with storage capacity for reliability – for customers across Alabama. In 2019 and 2020, we produced over 70,000 megawatt hours of incremental hydro generation. This is the approximate equivalent of a 40-megawatt solar facility each year. 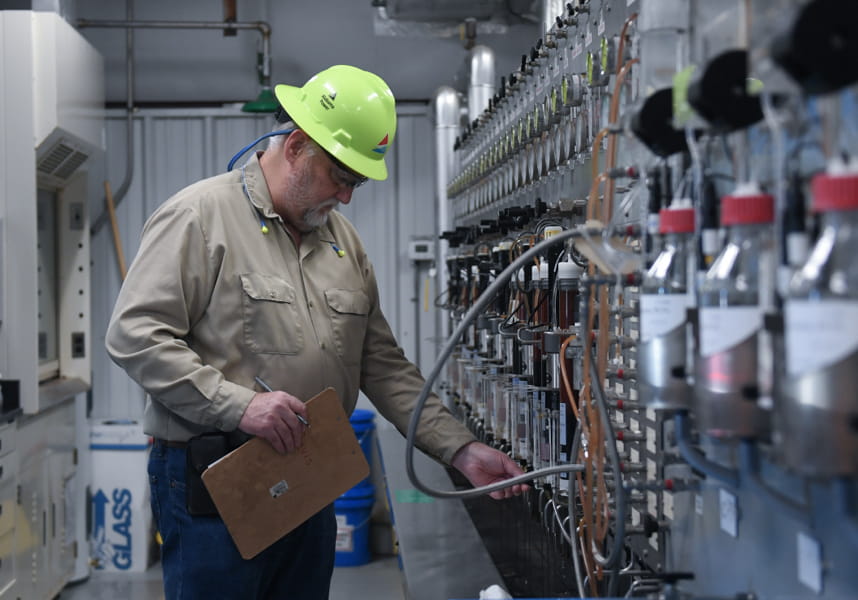 We are investing in predictive technology that will allow us to manage water flows. 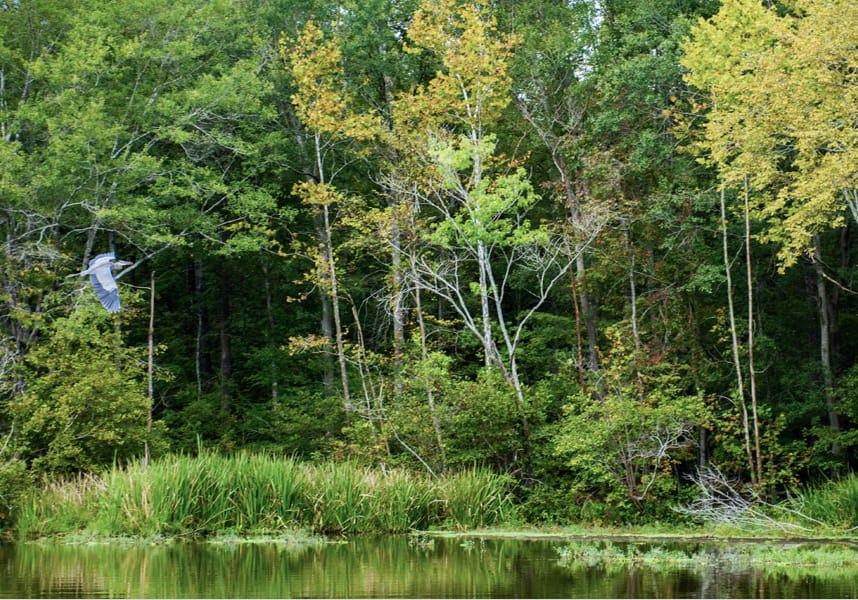 Along with partners from across Alabama, we’re conducting leading-edge research and helping to preserve wildlife habitats crucial for maintaining a vibrant, lasting ecosystem.

We seek to reduce our impact.

We reuse water. Approximately 95% of the water we use to create power and cool our plants goes back into the river or lake safely and responsibly for downstream use.

Our facilities are equipped with water treatment systems to help assure that the quality of these water bodies is maintained to support a healthy aquatic community and drinking water system.

We monitor and sample water quality at discharge points as part of our compliance with National Pollutant Discharge Elimination System (NPDES) permits. 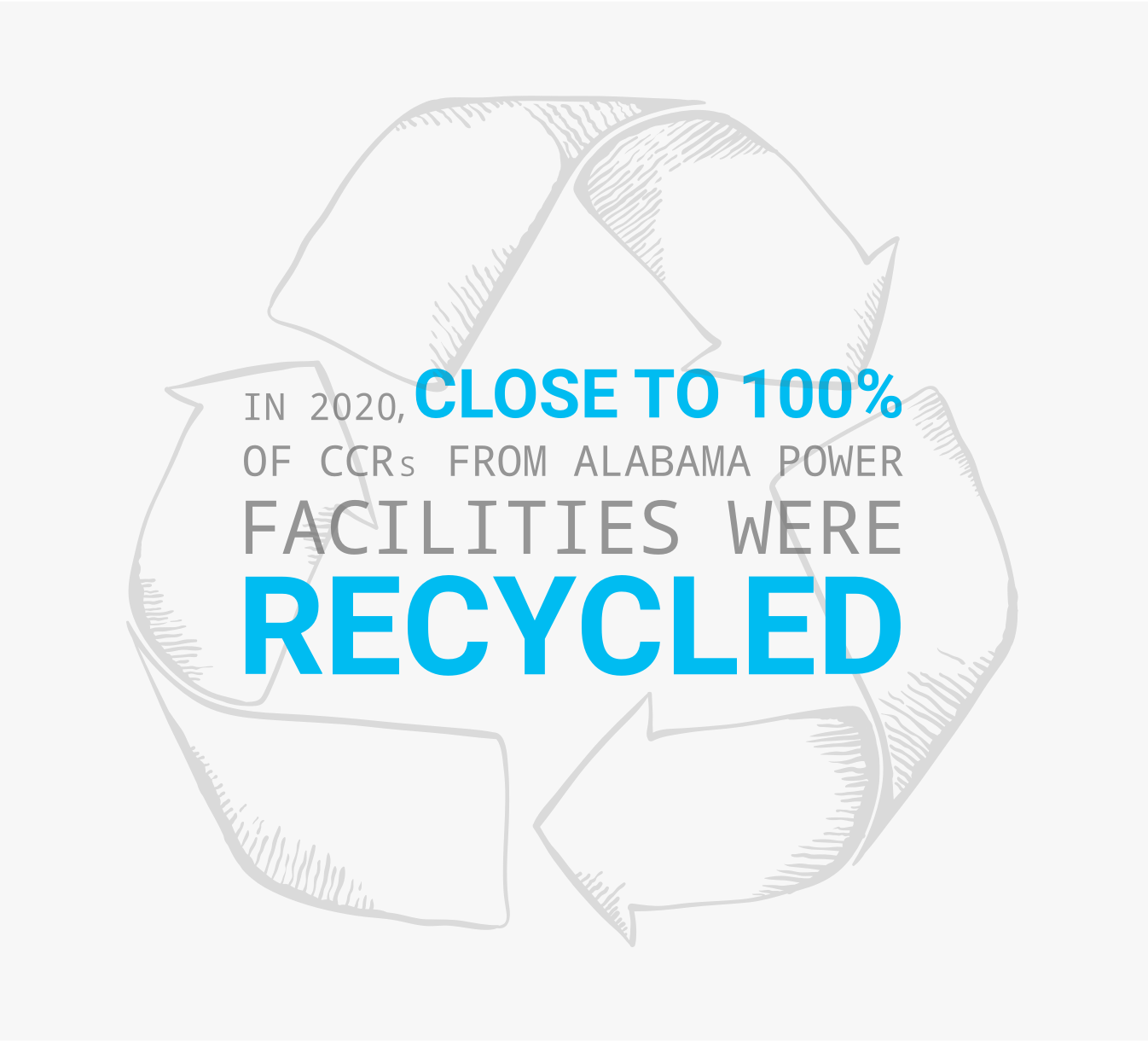 We recycle byproducts. Coal combustion residuals (CCRs) are beneficially reused in building materials like concrete and drywall. In 2020, close to 100% of CCRs from Alabama Power facilities were recycled, leading to improved strength and durability of the materials created. We’ll continue recycling as we safely and securely close our coal ash ponds, which have not received any new materials since 2019.

To learn more about our CCR efforts, click here.

Our dedication to the long-term health of Alabama waterways extends beyond our operations. Organized by Alabama Power employees from Plant Gadsden in 2000 and continuing to this day, Renew Our Rivers is one of the nation’s largest river cleanup programs. With the help of local community partners, volunteers and organizations, Alabama Power has coordinated more than 122,500 volunteers and removed more than 16 million pounds of trash and debris from the 77,000 miles of Alabama rivers and streams.

Through a public-private partnership with the Alabama Wildlife Federation, Alabama Department of Conservation and Natural Resources and Cooper/T. Smith, Alabama Power has found a way to extend the usefulness of aging equipment, developing new habitat for fish in the Gulf of Mexico. In 2016, two boilers were taken out of service at plants in Washington and Mobile counties, then sunk about 25 miles south of Sand Island Lighthouse to create a reef for red snapper, gray snapper, blennies, damselfish and amberjack. 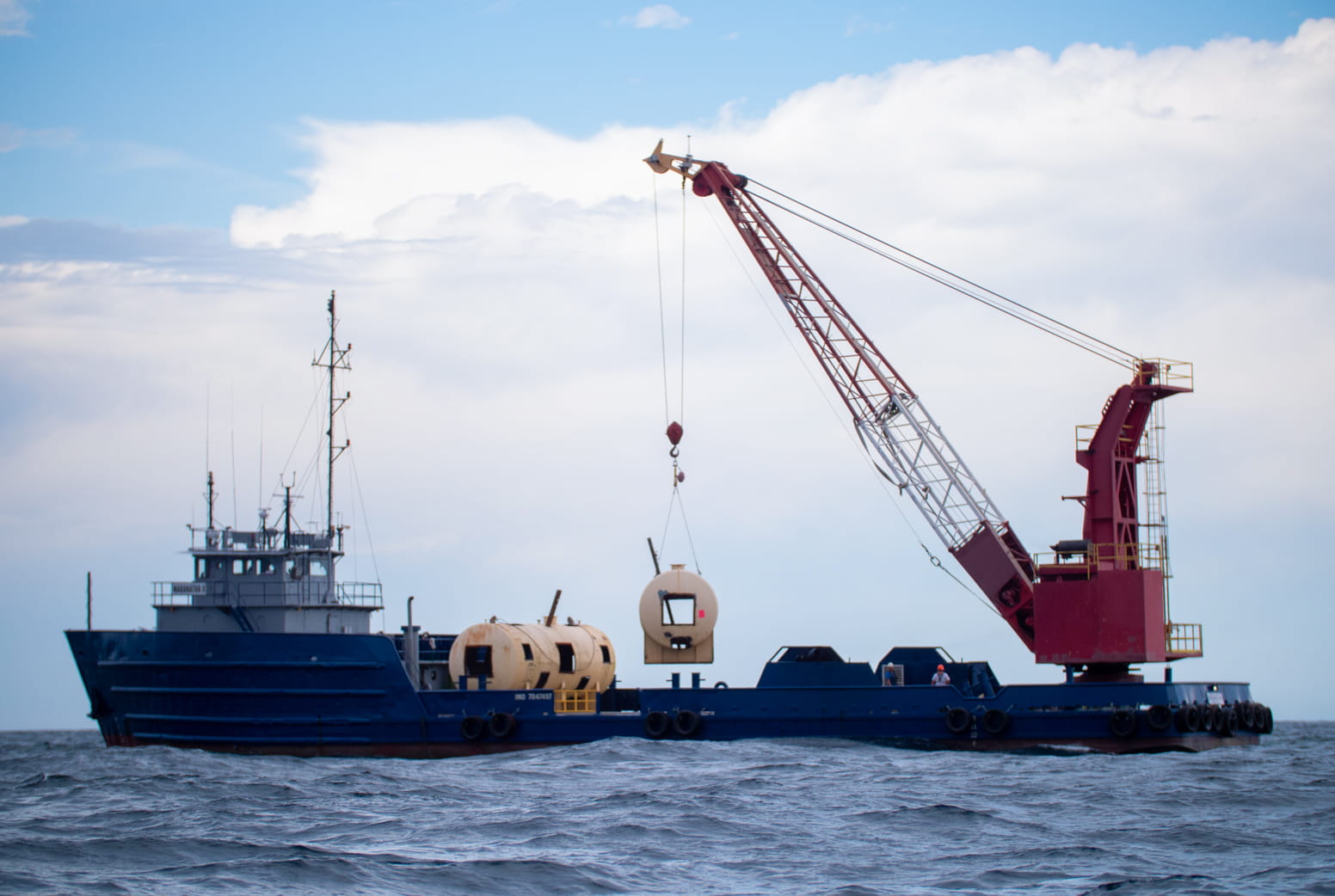 In 2020, three more tanks were taken from a plant in Mobile and added to Alabama’s vast artificial reef network, finding a new home about eight miles off the coast of Dauphin Island. It’s a great example of how we’re working together with others in both the public and private sectors to find innovative ways to give old equipment new life, while strengthening the environment along the way.

As the state tree, the longleaf pine holds a special place with Alabamians. But as an ecosystem, it contains a stunning diversity of plants and animals, including several endangered species. Once encompassing more than 90 million acres of North America, less than 5% of its original acreage remains, so sustaining this ecological network is of vital importance.

Alabama Power is proud to be one of many partners in the Longleaf Landscape Stewardship Fund – a landmark public-private partnership dedicated to restoring the longleaf pine ecosystem. The fund has invested more than $127 million into projects that have conserved or restored more than 2 million acres of longleaf pine. In 2020, five of the partnership’s projects were located in Alabama, strengthening the capacity of local organizations and landowners to lead restoration efforts.

The Longleaf Landscape Stewardship Fund builds on the success of the Longleaf Legacy Program, a partnership between Southern Company and the National Fish and Wildlife Federation. Since 2004, Southern Company has given more than $8.5 million to support projects throughout the Southeast to restore more than 87,000 acres of longleaf pine forest and the native species that rely on it. 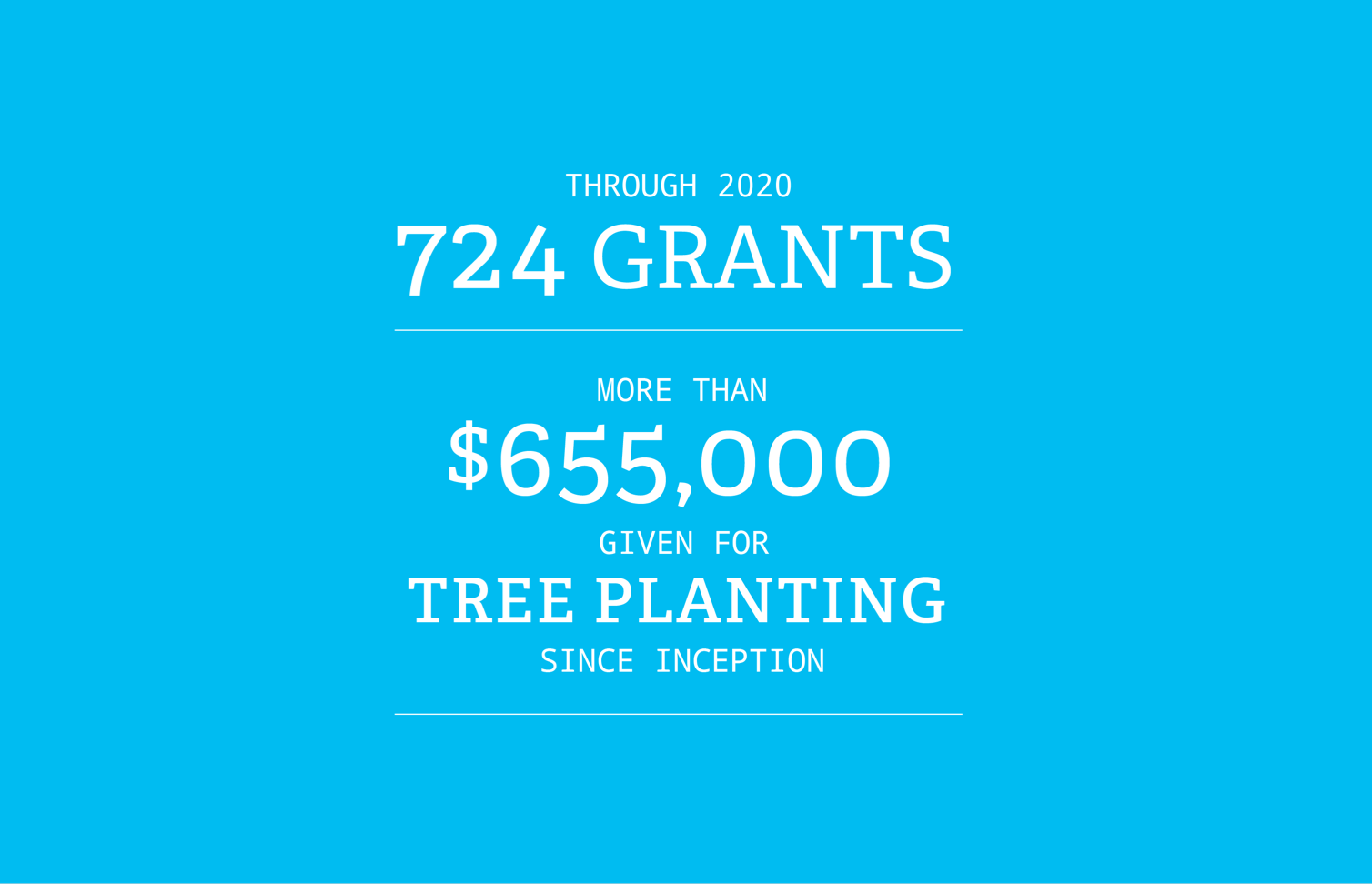 As a powerful source of good in our state, the Alabama Power Foundation helps protect natural resources through its grants. One of those efforts is the Good Roots Program, a partnership between the Alabama Urban Forestry Association and the Alabama Forestry Commission.

Good Roots grants provide up to $1,000 to help cities, towns, schools and nonprofits plant trees to enhance community green spaces. This program not only contributes to economic and cultural well-being, it also promotes natural beautification and restoration, and goes a long way toward building up and sustaining our communities while improving the lives of those who live there.

Alabama Power employs best practices in all aspects of our timber operations, including reforestation, erosion control and prescribed burning and thinning, which are necessary to keep habitats thriving. We’re committed to preserving the beauty, richness and diversity of our state’s natural landscape. Today’s stewardship efforts are part of an ongoing investment in sustaining our common future, one that has a long history and profound impact. 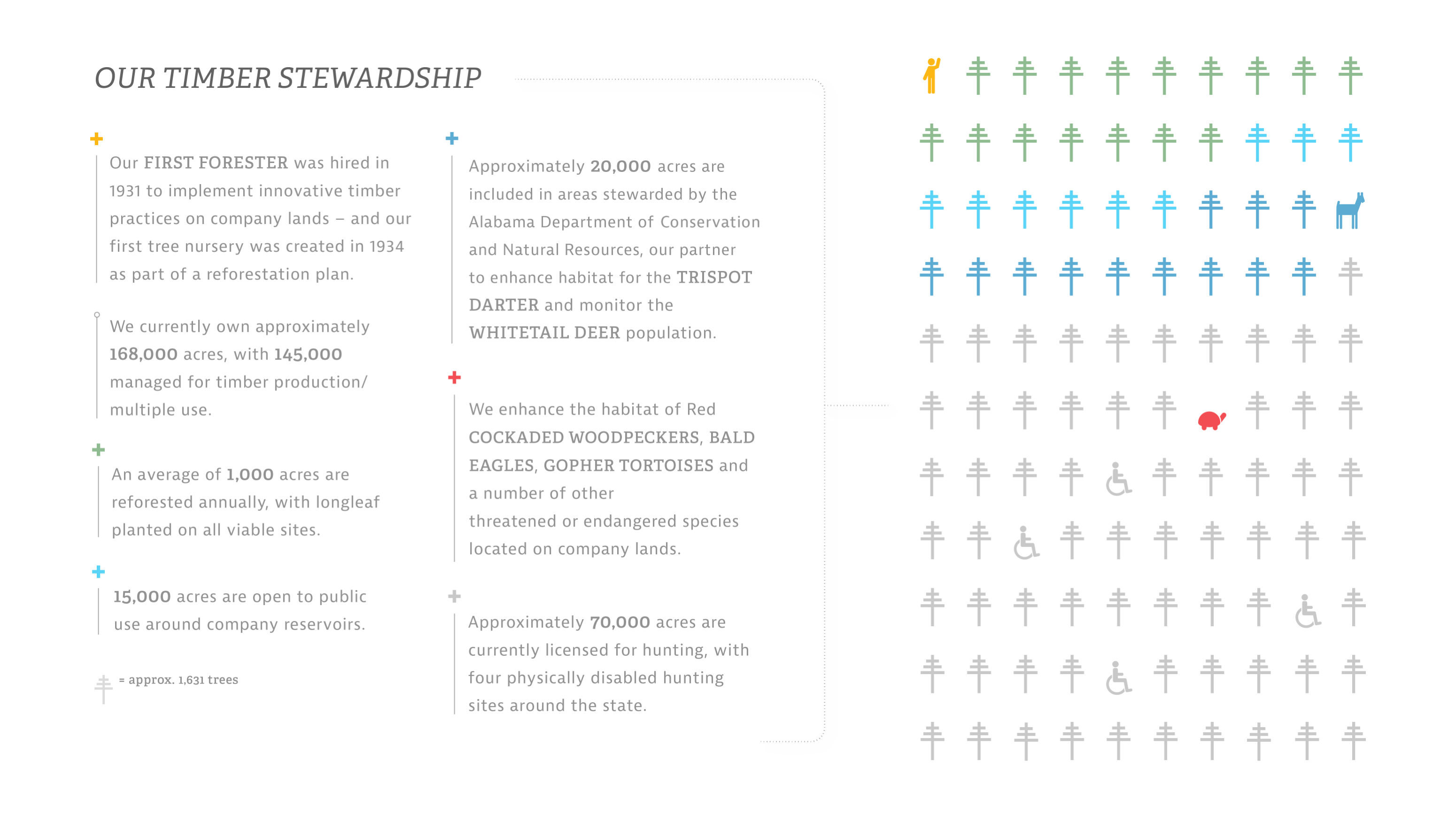 Back to grid
Next
Next Section

The cutting-edge technologies pioneered in Alabama are not only bringing jobs and opportunity to the state, but are being adopted industrywide to make a global difference.